Passing a Certain Age: Reflections on a Memoir 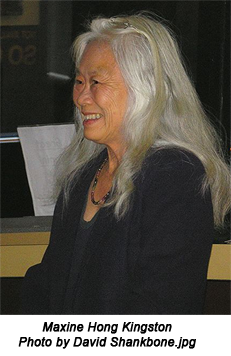 “Stop” – that’s the first step. Stop to think, stop to meditate, stop to ask questions. Turning 65 (or, in my case, 67) is a time to do just that. Maxine Hong Kingston wrote her memoir, I Love a Broad Margin to My Life, as she was turning 65. (She is older than that now. She was born in 1940.) She wrote her reflections – her meditation – in approximately 220 pages of blank verse.

For much of Maxine Hong Kingston’s memoir, the narrator visits places in China, the country of Maxine’s parents, relatives, and ancestors. Often the traveler is Wittman Ah Sing, the central character in her novel, Tripmaster Monkey: His Fake Book. Fa Mook Lan, the Woman Warrior from Chinese legend, also appears, as she does in Maxine Hong Kingston’s earlier The Woman Warrior: Memoirs of a Girlhood Among Ghosts. Other times the traveler is Maxine herself, and we are in the world of non-fiction. In her memoir-poem-meditation Maxine considers experience through the power of fiction, legend, and non-fiction. The lines between these ways of telling stories blur. I cannot help but wonder whether we discover more insights when we let those lines blur – rather than when we draw distinct, uncrossable boundaries. Tell the stories. That is what is important.

Maxine writes that this line from Thoreau’s Walden hangs over one of her desks: “I love a broad margin to my life.” But how does she make a broad margin to her life? Maxine was talking with her friend Mary Gordon. They were enjoying breakfast together:

Sitting here at this sidewalk café with Mary,
deliberately taking time off from writing
and teaching duties, I am making a broad margin
to my life. The margin will be broader when we part,
and I am alone.

“…deliberately…” is Maxine’s answer – not “accidentally” or “coincidentally” or “on a whim”. She takes time off from everyday duties and routine to make a broader margin to her life.

Originally from Viet Nam, the Zen Buddhist monk, Thich Nhat Hanh, was a major influence on the Military Veterans Writers Group that Maxine founded in the 1990’s. Here is how he makes a broad margin:

When you arrange flowers, it is good to leave space around each flower so it can reveal itself in its full beauty and freshness. You don’t need a lot of flowers – two or three are enough.

We human beings also need space to be happy. We practice stopping and calming in order to offer space to ourselves, inside and outside, and also to those we love. We need to let go of our projects, preoccupations, worries, and regrets, and create space around us. Space is freedom.

My first thoughts on the phrase “a broad margin” were my memories of most of the books I used in college. They had margins – what I called “wide margins”. In the margins, I wrote my notes, my questions, my reflections, my words about the words and illustrations on each page. Each book became my book.

Of her father, a poet and calligrapher, Maxine writes: “In the tradition of poet answering poet,/BaBa wrote in the margins of my books”.

To her father, she speaks:

I’ll suppose you. You speak up if I’ve got
you wrong. He answered me; he wrote
in the flyleaves and wide margins of the Chinese
editions of my books.

A list of tasks for the rest of my working life:
Translate Father’s writing into English.
Publish fine press editions of the books
with his calligraphy in the margins and
my translations and my commentary
on his commentary, like the I Ching.

Here is deep listening – not writing corrections in margins as English teachers do. Here a discussion, a dialogue, takes place on a broad margin and leads to discovery, appreciation, understanding, and insight. The broad margin offers the space for the dialogue to happen.

Making a broad margin to life brings out the qualities of a poet. The deep meaning of poet and poem in Greek is “to make”. A poet is a maker. A poem is anything made. To make a broad margin to his or her life, the individual needs to find the space to become a poet and to draw on the creative energy within. Maxine observes, “For the writer, doing something in fiction/is the same as doing it in life”. For the dancer, is doing something in dance the same as doing it in life? For the photographer, is doing something in photography the same as doing it in life? The list of poets – creative makers – includes writers. But the list of creative makers continues on with composers, players of musical instruments – the guitar, singers, actors, painters, calligraphers, cooks and chefs, photographers, dancers, designers of all kinds, gardeners, model-builders, story-tellers, and conversationalists. Turning 65 or 67 is a chance to broaden the margin to life – through creative energy – by becoming a poet in a new space.

Asking questions we can begin to broaden the margin to life. Asking questions boosts creative energy. Asking questions gives possibility and power to the creative energy that can show itself in so many forms – in the many ways of being a poet. Asking questions, I begin to re-direct my life. And re-directing my life, I am free to ask any questions I want and to answer them as I feel moved to answer them. The time has come for me to pull free of the opinions, biases, and prejudices of others – including bosses and managers. The time has come for me to work and live outside institutions and bureaucracies (in my case, the university or “academe”). Following orders and observing the rules and repeating back to the boss his own ideas are major parts of life in an institution or bureaucracy – not asking questions. Asking questions leads to different and new ways of thinking and the discovery of new ways of doing things and new purposes in life – and so, broadens the margin to life.

Turning 67, I have the chance to re-direct my energy and so re-direct my life. “I’ll stop,” Maxine promises herself, “and look at things I called/distractions”. 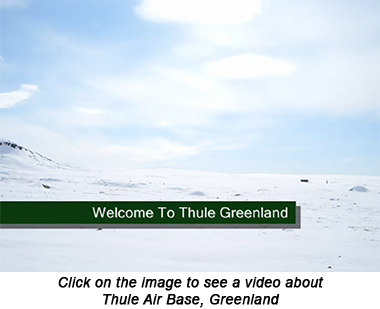 I have been amazed at what appears to be a contradiction or, more likely, a case of serendipity. As a much younger man, I served in the US Air Force. No doubt, the Air Force is an institution and a bureaucracy with regulations and rules and clear ranks of authority. However, when I had ideas or suggestions, I could meet with our Squadron Commander (Thule Air Base, Greenland) to talk. The Captain did not say to me, “That’s a stupid idea. You are too young. You don’t have the education and experience I have, and you are of such low rank.” He said, “Okay, then, you should be ready to take on the assignment – to try it out – to see what you can do.” He turned the suggestion over to me. Of course, I ended up with more work. But I was not worried about that. I wanted to have the chance of doing things especially interesting to me – including having a program on Armed Forces Radio (AFRTS), serving on the Board of Directors of the NCO Club, and teaching courses for a community college on base. 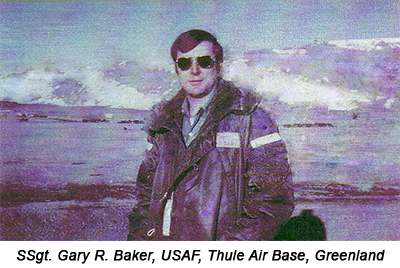 I know these assignments gave me energy and purpose. (My primary duty assignment was NCOIC, Personnel and Finance, at the USAF Dispensary.) I am sorry to say that seldom have I witnessed our Squadron Commander’s way of thinking in civilian work places – not even at the university. Our Squadron Commander broadened the margin to life.

Please visit the Thuleforum. Steffen Winther, Founder, has posted some outstanding photos, a bit of history, and interesting facts about Thule Air Base.

In February, on the day the sun was supposed to" return" after around the clock darkness - we played "Here Comes the Sun" on our AFRTS station, Thule Air Base, Greenland. But we were a bit over-hopeful. The sun was above the horizon for only a couple of minutes - and it was cloudy/overcast!

When Maxine put together her Military Veterans Writers Group in the 1990’s, she did so outside of an institution or bureaucracy or university – although she was teaching at UC Berkeley. Today the Community (the Sangha) continues to meet four times each year – free and on its own. The participants gather retreat-style in a blend of indoor and outdoor sessions and activities. No one worries about academic requirements and restrictions. They write. Thinking of one member of the Sangha at his funeral, Maxine observes, “He wrote his/way home”. That’s one of the goals of this community: Write Your Way Home.

Home, Leaving Home, seven villages in China, a city in China, and Home Again – Maxine lays out her memoir as places. I have been thinking of American places that have stayed in my mind over the years. It’s fun to let places re-appear in the imagination. I think about these places and my experiences in them. I am intrigued by the possibility of returning as an older traveler.

Here is one example. It was the Fourth of July, 1969, when I arrived at my first regular assignment in the Air Force at Vandenberg AFB on the central California coast. Several members of the squadron asked me to join them in celebrating the Fourth on the beach. I had never seen the Pacific. I felt the vibration, heard the rumbling, smelled the clean smell before I saw the ocean. The wind and sand and spray were cold – the Arctic Current flows along the coast. Wearing jackets, we rode the horses we had rented along the beach near Highway 1 – not far from San Luis Obispo and Santa Maria – the treeless Coastal Mountains just to the east. (I remember my horse was the oldest and most mellow.) Hefty mounds of kelp were everywhere – the smell of kelp competing with the smell of the ocean. My new friends built a fire on the beach – more to keep warm than to cook hot dogs. This experience re-appears in my mind’s eye every once in a while. I want to rent a horse and ride along that beach again – taking in that scene, thinking, and finding out what that scene means now.

“…I am making a broad margin/to my life”. Maxine does not write in the past tense here but in the continuous present. She wrote I Love a Broad Margin to My Life (the title a statement in the present tense) – as she turned 65.

Maxine concludes her memoir with yet another way to make a broad margin to her life. In “A surprise world”, has she found the best way at 65?

When I complete
this sentence, I shall begin taking
my sweet time to love the moment-to-moment
beauty of everything. Every one. Enow. *